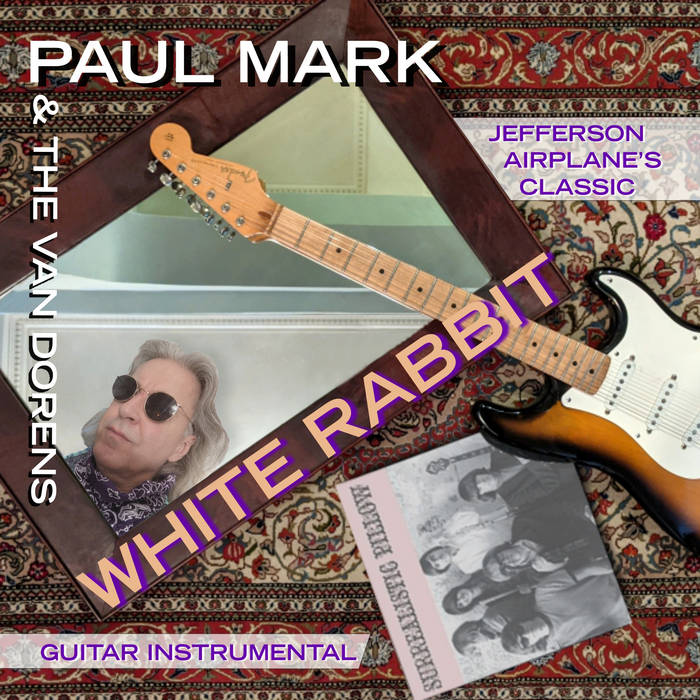 FREE MUSIC
Pay whatever you want to download this instrumental track. Paul Mark and Rad Records recommend that you pay ZERO. Then download away. Only requirement: Play It Loud.

SONG HISTORY - Notes by Paul Mark
Lead singer Grace Slick had written and performed "White Rabbit" well before she joined Jefferson Airplane. But the first commercial pressing of her song was on the band's 1966 album "Surrealistic Pillow". Never heard it? Use your Google/Spotify talents and partake, my friend. In the decades since its release generations of listeners have wallowed in the track's druggy Lewis Carrol ruminations and Alice's allegorical search for logic in a looking glass world. The bolero rhythm – rarely heard in rock music – is a wicked compositional device, itself a dervish-inducing hallucinogen. And Slick's stagey enunciation of her cherry-picked Carroll quotes evokes the crazed rantings you hear in high-camp horror movies. I've always thought "White Rabbit" was hands-down the best single to come out of San Francisco in the 60s. It's as trippy-transcendent as anything even the Beatles or Dylan did in those heady years. Go ask Hunter Thompson – references to "White Rabbit" turn up like yesterday's roaches in his writing.

COVER NOTES
This cover track began as one of those closeted pandemic lock-down projects. After lining up a number of possible remakes "White Rabbit" seemed to be the most weirdly apt for a keep-it-under-3-minutes Strat workout. Catchy, familiar and ripe for a cockeyed string-bending lift off. I'd always had one little complaint about the original (don't send me hate mail): the mix always seemed a bit off – the instrumental punch had been somewhat washed out and rendered too foggy. To feed my head I decided to retro-attack with a deep-soul guitar version, crisply mixed. BTW, the idea of me singing on this track never entered the equation. That would've been like attempting to play the Frankenstein monster after watching Karloff's performance.

GEAR/PERFORMANCE
The lead instrument here is a 30-year old maple-necked tobacco-sunburst '57 reissue Stratocaster (see cover photo). The guitar's tricked out with oversized frets and Texas Special pickups which have extra coil windings to generate a slightly hotter tone. The guitar signal was split and channeled through several separately-mic'd amps, including a 1964 Fender Deluxe Reverb, all of which are blended in the final mix to achieve a hyper-clean classic-quack Strat sound. I aggressively played with my bare fingers (no pick used here) to get that pull-and-snap attack on the fretboard. As you can probably hear I was crazy-riding the whammy bar throughout. During the sessions I went through two tremolo bars and stripped the bar's insertion threads in the bridge. Definitely a freeing approach to performance. But murder on the instrument...Guitar's now in the shop.

I played and recorded all instruments on this track in my Manhattan home studio. A Fender Jazz Bass and a military field drum make up the basic rhythm track, along with my old Guild D25M acoustic guitar. I also laid in a B3 organ pad and some percussion stuff for a fatter dynamic range. Go Ask Alice for further sonic tips.